I probably try to do too much on my phone.  It’s a screen small enough to fit in my pocket (and I want it to stay that way, thank you) but I do things on it that are challenging on a small screen like read a newspaper or watch a video or research items to buy.  Sure I can pinch and zoom and pan but the phone is just too small to do some things.  On the other hand, going to the desktop computer means I am fixed in once place and not free to roam.  It’s the place I go to get stuff done (and where I type this blog post!) and it is a wonderfully capable computer but there are many times when the capability is overkill and when I don’t need to be in the office.  I do have a Windows laptop and it has a nice dock but given that I use it for work and it is frequently in the middle of some work project, roaming around the house with it means I’d have to interrupt what I was doing.  And besides, it’s chunky and relatively heavy.  Again, it’s supposed to be those things because I need it to do a lot so I want it to have a lot inside.  But more recently, I’ve been realizing there are times when I want something “in between” my other devices.  I’d like something really portable and whose purpose is to roam about the house while at the same time having a big screen.  And I’d like to be able to take it on vacations instead of bringing my Windows laptop.  It’s time for a Tablet.

END_OF_DOCUMENT_TOKEN_TO_BE_REPLACED

One of the main reasons I wanted to wait to build the Hacintosh with MacOS 10.10 is the promise of Handoff.  I find that I sometimes start looking for info on the phone but then get to a point where the small size is just too constraining so I want to switch to the computer.  I end up e-mailing myself a URL.  How primitive!  Being able to handoff a URL from the phone to the computer would be way better.  The ability to make phone calls on my iPhone using the computer, what Apple calls Continuity, seems neat but that’s a nice-to-have, not a feature that I’d use often.  (If I am at the computer, odds are good that I am going to use the landline rather than the cell phone to make a call – nothing like a quality landline with zero delay, zero garbling, and zero signal drops.)

Unfortunately, after I got the Hacintosh working, Handoff didn’t appear to be working.  I was disappointed, but I had lots of other stuff to deal with at the time.  Now, it’s finally time to get back to trying to get that working.  So what is it that might be preventing it from working?

END_OF_DOCUMENT_TOKEN_TO_BE_REPLACED

It started with somebody saying they didn’t get my e-mail message.  Weird, but the Internet isn’t perfect.  Resent; problem solved.

But then it started happening more often.  It was still only to one client of mine, though, so I passed it off as some weird incompatibility between their servers and my servers.  It was annoying and something I intended to look into but it was easy enough to check via IM and confirm e-mail receipt when I didn’t hear back with an e-mail reply right away.  And I was starting to be able to track that it really was only messages I would send, not ones I was expecting to receive.

Then in late October, the problem got bad enough that I was not receiving about 1 in every 5 e-mail messages sent.  At least, that’s as far as I know because over the course of a couple of days I was told that how many messages needed to be resent.  And confirmed that the sender wasn’t getting any notification of any problem.  So on October 22 2015 I sent in a request to my ISP, Arvixe, to have them look into it.  In the past, they had been pretty responsive to such things.  Not so this time.

END_OF_DOCUMENT_TOKEN_TO_BE_REPLACED

I saw a number of so-called “mini-docks” listed on Amazon and eBay for the iPhone.  The problem is that they were too inexpensive!  Well, the real problem is that you can’t get a Apple certified lightning cable for as cheap as these mini-docks were running.  And that means that the lightning connector would not work with the Apple iOS without jailbreaking, etc..  In other words, the mini-docks wouldn’t be an easy charging solution.  And all I wanted was an easy charging solution for my car.

I’ve been using the Waze app more often now and I find that it really burns up the battery in the iPhone.  I can’t really fault it for doing that because it is using all the resources to save me time on my trip – i.e. more battery usage means less time in traffic.  So rather than turn off some of the phone’s features or not use Waze and end up spending more time in traffic, I’ve been hooking the phone in to my car’s lighter socket through a USB charger.  It charges successfully but it makes it harder to position the phone such that I can see the maps while driving.  Since the charging cable goes in the bottom, that means I have do landscape and the landscape mode puts the wire across where the shifter goes and makes it unstable resting in place.  I felt I could come up with a better and more stable solution.

I started off just looking for something to mount the phone to charge it but quickly became enamored with the idea of also getting audio output to my car stereo.  So basically, I wanted an iPhone mini-dock but one that worked with an Apple approved lightning cable.  I came up with a plan that uses basic parts and ends up with a decent looking homemade Apple dock that works with the iPhone’s case on.  And I also skipped using the visible lighter socket for a neater look.

END_OF_DOCUMENT_TOKEN_TO_BE_REPLACED

My 2001 Audi S4 isn’t new but I still love driving it.  And I’m holding off replacing it until a car comes along that meets my current needs.  (But that’s another post.)  For now, I’m happy to drive it and even improve on it.  As I wrote in another post, I’ve been needing to charge my phone in the car more frequently than before.  But I wanted the charging system to be a little nicer looking than the various wires draped across the console and connected to a lighter socket.  As you’ll read below, I was able to install an iPhone mini-dock in my car, and I think it looks pretty good here on the dashboard. 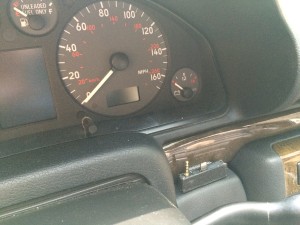 END_OF_DOCUMENT_TOKEN_TO_BE_REPLACED

Apple doesn’t usually make such dumb decisions.  But in this case, they’ve gotten good and stoopid.  I never upgraded my old Mac beyond Snow Leopard.  (I wanted to keep the ability to run PowerPC programs through Rosetta.)  So there were a number of applications I didn’t bother to upgrade to the latest and iWork was one of them.  I didn’t use it that often and when I did use it, iWork 08 provided all the capability I needed.  I think the upgrade would have cost me some money but even if it was free, I wasn’t in a rush to upgrade.

Now I’m on my new Mac and I downloaded and paid for the new version of iWork which doesn’t have a collective name but which is generally known as iWork 2013.  Right away I had a big problem: I can’t open files from iWork 08.  Numbers 2013 says that it can’t open such an old version and that I would need to first convert the file from Numbers 08 to Numbers 09 before I could open it in Numbers 2013.

END_OF_DOCUMENT_TOKEN_TO_BE_REPLACED

Let me start by saying I realize that this solution is not useful.  When I started working on it, I was frustrated that Quicken needed to have a key strike (or mouse click) to create a new transaction.  After you enter one transaction, you’d need to Command-N to create the next one.  How silly, I thought – better to have one key that does both things.  So I went through some effort to create AppleScript and associate it with a shortcut key.  And that’s when I discovered that if I just hit the Command-N while I was in a transaction, it would save the current one and create a new one.  While that’s not quite the functionality I’d like in Quicken, it was in fact the same functionality I had come up with in my AppleScript but with a better shortcut key than I had.  But since it is the first time I created AppleScript on my own or used Shortcut Keys, I wanted to document what I had done.  Again, not so I can do this exactly, but in case I come up with something else that can use some of what I learned here and from a Stack Exchange post.

END_OF_DOCUMENT_TOKEN_TO_BE_REPLACED

I’ve still been using Quicken Mac 2006 on Snow Leopard.  That’s one of the reasons I never upgraded my old Hacintosh and left it with Snow.  Apple removed the “Rosetta” feature from later versions MacOS and that means applications written for the older PowerPC architecture would no longer work on those versions of MacOS.  Maybe Apple had a good technical reason for removing Rosetta or maybe it was just a business decision – either way, it meant I stayed with Quicken Mac 2006 and Snow Leopard.  (I never bothered to upgrade to Quicken Mac 2007 because I didn’t like spending money to constantly upgraded for things I never really felt were important.)  But now the old Hacintosh is dying (see other posts) and it’s time to move to Yosemite and that means no more Quicken 2006.

Amazingly, Intuit hadn’t released a new version of Quicken for the Mac since 2007.  Well, there was a half-hearted attempt to release something they called Quicken Essentials which was cute but useless – a glorified checkbook register.  During that time, I poked around at Moneydance and iBank but didn’t see enough to make me comfortable making the jump.  Now, 8 years later, Quicken released Quicken Mac 2015 to mixed reviews.  With me now being forced to jump, I needed to make the decision on what to jump to.  iBank was still out for lack of some investment features (according to other reviews I read).  But Moneydance and Quicken 2015 were both supposedly capable.

Frankly, based on Quicken’s poor track record with Mac (and the fact that Intuit forced me to switch to Quicken for Windows in the 90s before switching back to Quicken for Mac in the early 00s), I didn’t feel any loyalty to Quicken.  So I didn’t set out to compare Quicken 2015 to Moneydance.  I actually just planned on diving in to Moneydance whole hog and never looking back.

END_OF_DOCUMENT_TOKEN_TO_BE_REPLACED

I’m happy to report that the transfer of my data from the old Hacintosh to the new worked quite well.  It was nearly as simple as it is supposed to be.  And of the two major glitches I had, only one is definitely the fault of this being a Hacintosh.

END_OF_DOCUMENT_TOKEN_TO_BE_REPLACED

In addition to the normal Hacintosh challenges, I tried to make my life more challenging by deciding to set it up to boot Windows 7 and Ubuntu 14 also.  But unlike in my original Hac, where my main system drive was, partitioned to handle all three OSes, this time my main system drive is left alone.