With the World Cup only recently having concluded, how could I pass up a chance to see some international soccer right here at Fenway Park!? Celtic FC and Sporting Clube De Portugal played in a slightly smaller field stretched across the Fenway grass from visitor’s dugout to the bullpen (see picture below). 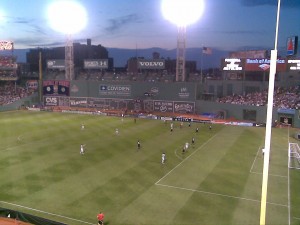 It turned out to be a good game which was a nice surprise, especially after some lame World Cup games – open play, good scoring chances from one side were answered with good scoring changes from the other.

Some of the chippy play and diving did work it’s way into the game, particularly in the form of play from Celtic’s striker Georgios Samaras who was ball handling in the box and drew a foul to get a PK. He didn’t even still have possession of the ball at the time he was “tripped” by a defender standing still that Samaras ran into but he made it look good and that put Celtic up 1-nil. Sporting’s goal was pretty, though, and that made me want them to win.

The game ended in a 1-1 tie. The announcer said “In accordance with FIFA Rules Of The Game, the final recorded score will be a 1 to 1 tie game. Penalty kicks will only be used to determine the winner.”. Classic FIFA statement! Anyway, the PKs went 6 to 5 Celtic’s way. But it was a fun game and I’m glad I got to see it.

The announcer said they had over 32,000 people. That’s not quite a sellout, but within a few thousand of a sellout. I’d love to see them repeat this kind of event every summer with different teams. It must be easier to setup for soccer than for hockey, at least!!