For a while, I’ve been driving my 2001 Audi S4 with “Air Bag” lit up on the dashboard.  Obviously, it indicated some sort of problem but I wasn’t sure what it meant.  I assumed it involved big money so I figured I would postpone it for a bit and try to not crash in the mean time.

Now my repair shop is great and they don’t jack up prices on parts.  So before I even started looking, I knew that their price would be fair.  It was.  For some reason, new control modules are really expensive.  I guess it is partly because “used” ones that are in good working order are hard to come by.  It’s also interesting to note that the control module for a 2001 S4 is actually different from a 2001 A4.  The S4 included side curtain air bags while the A4 did not and the control module needed to be different for the different cars.  So the original part number for the A4 control module is 8D0-959-655-K while the original part number for the S4 is 8D0-959-655-G.  (Note that there is another number floating out there 8D0-959-655-M that also seems to apply to the A4 but I don’t know what the difference is to the -K.)  So the parts are not interchangeable!  It’s important to get a match.  It gets more confusing because the older parts have been superseded.  The former 8D0-959-655-K is now 8D0-959-655-TC and the former 8D0-959-655-G is now 8D0-959-655-TA.

I was able to find some of the older -K on eBay and even found a -G there.  But the seller didn’t know if there was crash data in the module.  And since these modules are frequently pulled from cars that are otherwise unusable, crashes are frequent reasons to find a used one.  But crash data could cause a problem in the control module when switching to a new car.  So I could take my chance but that’s not a great choice for me or for the eBay seller.

I was delighted to find a seller on eBay selling from the UK that had the newer -TA in new original packaging (never used) and available for $200.  I hadn’t ordered stuff like this internationally before but this seemed like the right time to try it out!  It was estimated to take about three weeks and I think it took under two for it to arrive and strangely, it arrived by UPS from Budapest!  (Apparently the seller in the UK has somebody ship from Hungary.)

Another item I knew I was going to need is the wire to hook in to the OBD connector.  I ordered that through eBay.  Only $5.95 including shipping.  And the VCDS-Lite software is what I planned to use.

Before doing anything, it’s important to make note of the control module details in VCDS-Lite.  It showed the part number “8D0 959 655 G”, soft coding was “00304” and shop number was “WSC 06435”.  I took a screenshot of the way it looked so I wouldn’t forget anything later.

Okay, so now I want to save the labor too, so what does it take to do the install?  Well, according to my Bentley e-manual (that I bought with the car), the control module actually lives behind the radio in the center console.  What an, umm, interesting place for it.

Here’s what I discovered.  First, you need to pull the radio out.  To do that, you need to have some radio pulling tools.  I recommend 4 of them.  You can buy them in kits.  (I had some from a previous project.)  Then you remove all the connectors from the radio and pull the radio out.  Next, you pop out the climate control system by pushing from where you have removed the radio and remove all the connectors from that.  The heated seat connectors are the toughest to come out but they will come out when you pull straight as you wiggle them.  You can also pop off the top rounded trim where the hazard flasher button is – pry carefully with fingers.  With all of that off, then you can start unscrewing the screws that hold the frame in place.  You’ll also want to remove the center console around the parking brake.  For more information on the removal process, see the article at AudiWorld.

With everything now removed, you should be able to see the control module screwed into the center tunnel behind where the climate control system was.  In the picture below, you can barely make out the control module with the orange strip on it behind the green connector in the middle of the picture. 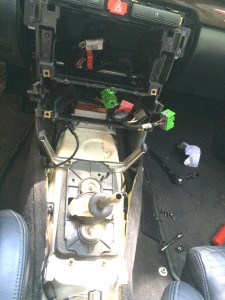 To remove the old one, you need to pop the connector out of the back of it and unscrew the three nuts holding it in place.  I found that to do this, I used the long ratchet extender and the u-joint socket adapter.  And even with that, I managed to scrape up my knuckles.  The new one goes in as the old one comes out.  And then you get to put it all back together.  All in all, the time to disassemble and reassemble – and figure it out as I went! – took probably 2 hours.  That’s not bad when you consider where it is in the car.

Okay, the new control module is in the car and the car is reassembled and ready for action.  So let’s try this VAG-COM thing.  Yep, I can see in VCDS-Lite that the soft coding and shop number are not a match for what I had before.  So just need to recode and…  dang.  To do that in VCDS-Lite, I need to register.  It’s confusing but there is VCDS which is expensive software you pay for and VCDS-Lite which you can use for free to do basically read-only operations or pay for VCDS-Lite so you can do read and write operations.  Well guess it is time to register for VCDS-Lite.  $99 is a little steep for what I need but at least it is still cheaper than paying to have it done.

Where was I?  Oh right, updating the coding in VCDS-Lite.  Done.  That was easy.  I also cleared the fault codes while I was there.  I was surprised they persisted after changing out the module but maybe the fault codes are stored in some other part of the computer.  And boy was I happy to see that there were no new fault codes – that means that the fault code about the driver’s air bag was indeed a bogus error code from the failing old control module.  Whew.  That saves a lot of money too.

In the end, it cost $200 for the new control module, $6 for the wire, and $99 for a registration for software plus a couple of hours of my time.  That’s pretty cheap compared to the $1500 or so I was facing at first.  And again, no knock on my shop but they need to charge the regular rate for labor plus they can’t work with unknown parts purchased over eBay.  So this repair is definitely do-able if you have the right tools and some mechanical inclination and hopefully can get a good deal on the part like I did.

And now that I am reminded how the console comes apart, I used the knowledge to add an iPhone mini-dock described in my mini-dock post and the post about installing it in my S4.

I also used the access to VCDS-Lite to tweak my locking and window settings.  The standard coding for my car was 16140.  As detailed in the Ross-Tech doc (scroll to the “35-Central Locks” section), I wanted to add “windows up, sunroof close, and windows down with remote” and add the “one touch unlock of all 4 doors and trunk”.  That means 16140+64-4=16200.  And voila, the car’s behavior is now altered and works the way I wish it had since I bought the car.  I should have done this years ago.