In 2001, an alarm may have seemed like a useful feature for a Toyota Camry.  But now 17 years later, the car is a pretty low theft target.  And more importantly, the alarm always behaved strangely.  And as of today, it shorted out due to water getting inside the car so the alarm was constantly sounding – at 5:30am in a crowded neighborhood.  So it was now time for the alarm system to leave the car.

17 years of living with this nonsense has been annoying.  But it only took one early morning persistent false alarm problem for me to decide a change was needed.  At 6:00am when I realized that pushing the button on the remote to disarm the alarm wasn’t going to do the trick, I did the temporary disabling technique.  That is that you disarm the alarm, get in the car, put the key in the ignition, start the engine (or perhaps just turn the ignition to on), and within 5 seconds, flip or press the secret alarm switch 3 times.  When done successfully, the alarm will let out another chirp.  It was when I did this that I discovered that the button was wet and that’s when I realized I had another water infiltration problem.

I’ve blogged about the water infiltration problem twice before – once in 2011 and again in 2015.  The upshot is the sunroof gutter is internal to the vehicle and the openings to the drain lines get clogged with sediment making the gutter overflow into the car over the headliner and down any path it can find.  In the case yesterday, that meant down the driver’s A pillar and into the electronics in the exterior side of the driver’s footwell.  And even when the drain line isn’t clogged, it drains into the frame of the car, not out the wheel well like a normal car.  This is so incredibly maddeningly stupid, a future Toyota purchase is highly unlikely.

Back to the removal.  I started my quest to remove the alarm with Google and found only one hit that seemed to discuss actually removing the alarm.  The post at justanswer.com detailed how to remove the unit from the car.  I pulled the glove box out but the device was not there.  I worked pretty hard to find it in there but it just wasn’t there to be found.  Other results really only talked about how to disable the alarm, like this video from CamryForums.

It was at this point that I put some pieces together.  When the car was purchased, it didn’t have the alarm in it but the dealer said they would put in the factory alarm – that it could be added easily.  The alarm secret switch was in a strange place and the red alarm light was drilled into a blank on the dash.  And now the unit isn’t in the factory location.  Ah-ha.  This is not a factory alarm I’m dealing with, is it.  17 years ago, the dealership installed an aftermarket one, not a factory one as promised.  And that could explain the strange problems – that it was never installed correctly or didn’t match this car well.  And therefore, rather than trying to figure out how to remove an alarm for a 2001 Camry, what I really needed to do was figure out what was done to install the alarm and undo those steps.

(All pictures below are taken after the components were removed because it was raining out and the rest of Hurricane Florence was on the way so I just wanted to wrap up the project and get inside – yet another reason to figure out how to get a garage.)

I started by trying to figure out where the alarm stuff would be installed.  Well, probably the easiest way to figure that out would be to go to the switch and trace some wiring.  That turned out to be way easier than I expected.  The switch was installed in the footwell trim and that trim piece pops off after removing a plastic fastener that you can unscrew with your fingers.  The wires in that plastic piece went to a plastic box stuffed under some more wiring.  And here’s something really strange.  The video linked to above shows a still image preview of the alarm unit that I found even though that unit isn’t shown at all in the video.  It took some finagling to figure out how to unclip the wire connectors from the box.  But I eventually got it out.  Here’s what it looks like after removed from the car. 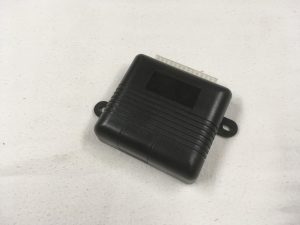 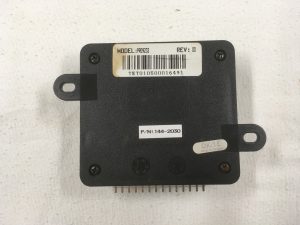 Looking up the model number shows that it is an Audiovox Pro9232.  Ah-ha, not a factory alarm at all.  And all this time I’d been blaming Toyota for the alarm when I should have been blaming either the installer, Audiovox, the dealership, or some combination of the three of them.

With that removed, I may have solved the noise problem but I still had to keep going to remove the rest of the wiring so that the car would work.  The install job had been pretty lousy install.  The installer had stripped the middle section of wires and wrapped the alarm wire around them covering them with just electrical tape.  I found that I couldn’t just pull the wires out of the splices so I just clipped the alarm wire and then taped over the splice with more electrical tape.  Sure, this made the ugly install even uglier.  But given that it’s been this way for 17 years, I think however much longer the car has will be fine extending this ugliness.

Many of the splices were close to where the alarm had been installed, presumably the reason it was there.  But to get at the rest of the splices, I needed to take off a metal plate under the steer column.  Three bolts to pop that off and then I could trace the wires over to the ignition area.  Apparently this is where the ignition kill is.  There was a relay in there which presumably, when powered, allowed a connection to go through to the ignition wire.  In fact, this is the only part of the alarm install where the installer had cut a wire and that was to insert the relay into the ignition path.  Here is what the relay looked like after it was removed. 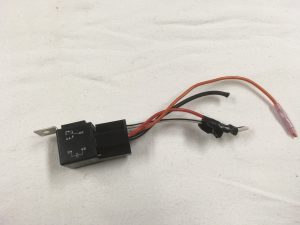 I was able to figure out which wire had been cut originally for the relay to be inserted and therefore, it was that wire that I needed to splice back together.  At least I was pretty sure, so after stripping the ends, I did a quick tentative test touch while making sure I wasn’t grounded to the car’s metal.  No sparks, so I proceeded.  I used a tube splice and crimped it to rejoin the original wires together.

I also needed to clip the wires going to the speaker.  The installer had drilled a hole through the firewall and mounted the horn speaker in the engine compartment.  Fortunately the rusty screws did release and I was able to simply unscrew the speaker and remove it.  Here’s the speaker removed. 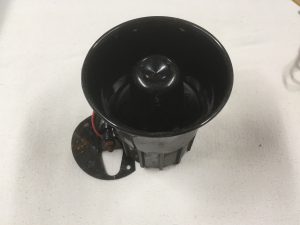 And now with all those components removed and the wiring clipped and old splices taped over, I could remove the alarm wiring harness.  Here is what it looked like after coming out. 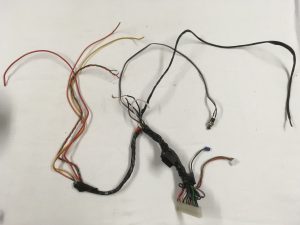 The only thing remaining at this point is the red light in the dashboard blank.  I left the light installed because it seemed to have been glued into the blank.  And I just wrapped the wires in a bundle to sit right behind the blank.

The car starts correctly and the remote is back to working like it would have before the alarm is installed.  That is, the lock and unlock do what they are supposed to do and there’s no alarm weirdness to worry about all now.  Now if I could only figure out how to prevent water from getting through the closed sunroof…